My earliest efforts at writing--I'm talking about my first serious, professional efforts at, say, 13 or 14 -- were always stymied fairly early on. I'd start a story, which meant I'd have to introduce a character. And that meant I'd have to describe what the character looked like. 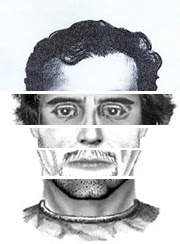 It seemed to me that I couldn't continue until I'd managed a description, and basically, I had no idea what people looked like. I'd get as far as "He had two (brown/blue) eyes, a big/small nose, and a mouth." I don't think I ever got as far as (full, thin) lips or (even/crooked) teeth. And there went my professional career, down to defeat with a wry grin or the wink of an eye.

Many years and some actual books later, I'm not sure I'm any better at it. So, for the benefit of those similarly challenged, I thought I'd make a desultory examination of how other writers tell you what people looked like. I started with the books closest to hand, which were the books I'd downloaded to my new iPad because they were free.

Mostly, they don't, which is something that never occurred to the younger professional me. Jane Austen's famous for it. There is not a single word of physical description in any of her novels,and yet we all know what her characters look like. (Well, we know for sure that Mr. Darcy looks like Laurence Olivier.)
George Eliot does look into her characters' faces, even if they're often only sidelong glances. We get two different views of Mr. Casaubon, from the lovestruck Dorothea, who sees his iron-grey hair and deep eye sockets, to her repulsed sister Celia, who is more inclined to notice his two white moles with hairs on them, his sallow complexion, and the way he always blinks before he speaks. In any event, mere looks don't impress Dorothea. If they did, she might take an interest in that nice Sir James, who is presumably handsome, although we only know for sure that he is red-whiskered (and made of excellent human dough, if that counts).

We get much more detailed head-on looks at Eliot's minor characters, such as Mr. Cadwallader, a large man with full lips and a sweet smile. Fourteen-year-old professional Tad could actually have managed that one, once I'd mastered the full lips part. But Eliot gives us more:

Very plain and rough in his exterior, but with that solid imperturbable ease and good humor which is infectious, and like great grassy hills in the sunshine, quiets even an irritated egoism, and makes it rather ashamed of itself.

Young Ladislaw with the curly hair gets a fairly conventional treatment:


A pair of gray eyes rather near together, a delicate irregular nose with a little ripple in it, and hair falling backwards; but there was a mouth and chin of a more prominent, threatening aspect than belonged to the type of the grandmother's miniature. Young Ladislaw did not feel it necessary to smile, as if he charmed...but rather wore a pouting air of discontent.