In Medias Res -- what then?

Another Creative Writing I exercise. Again, these are students just beginning to learn something about the craft.

Christine sat on the tacky pleather couch, her vision blurred by her heavily matted black makeup. It took her a minute realize what was happening when her friends began lowering their heads to the table. This was her first time in a nightclub; it was a night of a lot of firsts. Earlier that evening she slipped on a skin-tight sequin dress and dug her feet into a pair of much too high heels. All borrowed from Janessa. Christine knew any moment that the offer would come her way. She felt the sweaty hand of a stranger on her bare thigh and couldn’t help but picture her mother. Home in bed for hours now, no doubt. She imagined her mother was dreaming of her “perfect daughter” at her prestigious college, studying or finding a cure for some nefarious disease. Christine quickly brushed the thought from her mind. Her heart thumped heavily in time with the bass of the loud music as the stranger leaned in and whispered in her ear. And without another thought she took the rolled up dollar bill and followed suit. 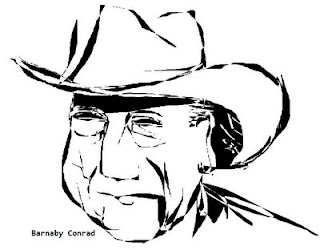 This is from an exercise -- write a scene that uses action to develop or illuminate character. It might be the beginning of a story, it might not. But in either case, the paragraph plunges us into a situation.

One of the books I use in a beginning Creative Writing class is Learning to Write Fiction from the Masters, by Barnaby Conrad, a novelist who also worked as secretary to Sinclair Lewis. Conrad has some good, workmanlike advice about the craft of fiction, particularly in a chapter on opening paragraphs. He presents, with examples, twelve different ways of starting a story. One of them is in medias res, "Rather than setting the scene or describing the situation in detail beforehand, the writer plunges the reader directly "into the middle of things."*

This student has started with in medias res, and here's what I said to her.

The in media res opening to a story, or a scene, can be very effective, but it has its pitfalls. What do you do next, after you've thrown your character -- and more importantly, your reader -- into the middle of the action?

This paragraph, unfortunately, is what you don't do. You can't then back up to the beginning and fill the reader in on everything. That kinda negates the whole point of in media res, which is to hit the ground running and let the reader know that she/he is going to have to run too, to catch up. It creates momentum, a sense of breathless excitement.

What if you just leave the exposition out?

Christine sat on the tacky pleather couch, her vision blurred by her heavily matted black makeup.  She felt the sweaty hand of a stranger on her bare thigh and couldn’t help but picture her mother. Home in bed for hours now, no doubt, dreaming of her perfect daughter finding a cure for some nefarious disease. Christine's heart thumped heavily in time with the bass of the loud music as the stranger leaned in and whispered in her ear. And without another thought she took the rolled up dollar bill and followed suit.

What do you think? How does it work for you now? It's all action, except for the imagined vision of her mother. And with all the exposition cut out, you have room for more action, more description, more development of that scene. You can maybe put the sequined dress back in -- I guess slit up the side, or a mini, to expose the thigh. I like slit up the side better, but that's just me. In any event, you can put her in the dress, and describe it, but describe it there -- don't take us back to earlier in the evening.

Remember the point of both of these exercises -- a scene with description of concrete detail, a scene with action -- is to use description and action to reveal and develop character. Is that happening here? With the exposition cleared out of the way, it's starting to.

What do you want to show in this scene? Christine's desire to go beyond her limits, some sense of what those limits are, some idea of her motivation, how she deals with the unknown becoming the actual? Probably something like that. But once you sort of know that, forget it. Get into the scene. What's happening? What is she doing? What are other people doing around her?

At first reading -- too much makeup, the hand on the thigh, the whisper in the air, the exchange of money -- I thought she was turning a trick for the first time. But then I realized no, she wouldn't be doing that for a dollar. She's doing a line. But still, the hand, the whisper -- there's dangerous sex lurking around the edges of this scene. Is she doing the line to enhance the experience? Or -- perhaps more interesting, because it's emotions in conflict -- because this is what she came for, but now she's not so sure it's what she wants, and she's using the cocaine as a way of putting it off? How would the action of the scene -- just this scene -- be different if it were the one or the other?

But, reiterating my point -- once you've got her in the room, with a strange hand on her thigh, it's too late to go back to exposition. You're in the scene, and you need to be there.

Email ThisBlogThis!Share to TwitterShare to FacebookShare to Pinterest
Labels: Writing