This is a new turn in the career of Shirley Scott, as her organ-tenor sax partnership shifts from Eddie "Lockjaw" Davis to Stanley Turrentine, and this one is a partnership that extended beyond the recording studio: Scott and Turrentine were married in 1960, and their marriage lasted until 1971, dissolving right around the time that Bob Weinstock dissolved his connection with Prestige, and the label wrote the last chapter in its history as a presenter of new jazz recordings. 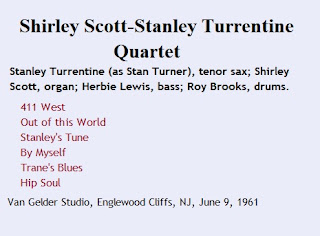 What's the difference between the two combos? I hear more warmth in the Scott-Turrentine pairing, but perhaps that's just the romantic in me. Or maybe it's the romantic in Turrentine, stemming from his apprenticeship with Earl Bostic, with whom he served an apprenticeship (replacing John, Coltrane as the tenor sax chair in Bostic's band) in 1953.

Turrentine entered the upper echelons of jazz society in 1959, when he and his older brother Tommy joined Max Roach. Their first session with Roach, for EmArcy, was one of those oddities that could have come into being in those years when stereo was still an oddity. It was a gimmick album called Rich vs. Roach, the gimmick being that each drummer brought his quintet with him, and each quintet occupied a separate stereo channel. This is not a gimmick you'd want to see repeated a whole lot. Ornette Coleman did it on his album Free Jazz, with two quartets split over two stereo channels. but Coleman was a complex genius, and Free Jazz was an important musical experiment, not a gimmick. Still, it's fun in a weird sort of way to have this one. 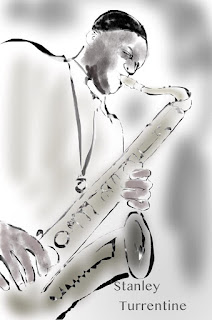 Turrentine went on to record several more albums with Roach over a very short period of time. A session with Dizzy Reece brought him to Blue Note in April of 1960. He then did two Blue Note albums with Jimmy Smith, and in June, he recorded his first Blue Note album as leader. That same year, he married Shirley Scott. Like Romeo and Juliet, Scott and Turrentine came from two households. both alike in dignity, but unlike milords Montague and Capulet, Alfred Lion and Bob Weinstock did not with civil blood make their civil hands unclean. The course of true love was allowed to run smooth for the better part of a decade, and Scott and Turrentine were able to make a number of albums together--under her name as leader for Prestige, under his for Blue Note. This session, however, came before the contractual swap was ironed out, and the new Mr. Shirley Scott is billed as Stan Turner.

Scott had a new rhythm section to go with her new husband and musical partner. Bassist Herbie Lewis was a West Coaster who had broken in with Les McCann in 160, then come east to join Chico Hamilton. He was to stay in New York for a decade, then return to California, where he became director of the music program at the New College of California, in San Francisco. Roy Brooks was yet another musician to bubble out of the jazz cauldron of Detroit, playing with Yusef Lateef, Barry Harris, and Sonny Red, with whom he had his first recording session. Stanley Turrentine provides two of the tunes for Stan Turner and Scott to play. "Hip Soul" is the more jukebox-oriented of the two, with a solid, danceable riff, and it's the one that made the jukeboxes as a two-sided 45 RPM single. "Stanley's Time" gives them more room for improvisation, but it's catchy as well.

Harold Arlen/Johnny Mercer's "Out of this World" and "By Myself," by Howard Dietz and Arthur Schwartz, are the two standards, and one would think these would give them plenty of room to explore their romantic side, but not so, especially "By Myself." This is the weeper best known for Judy Garland's 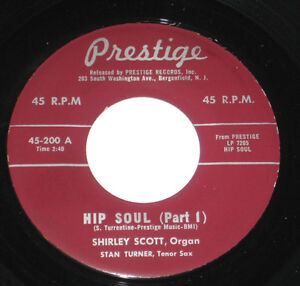 rendition, which pulls out every stop of heartbreak. Here Turrentine and the rhythm section start it off a tempo a little to brisk for tormented introspection, and then Scott comes in and takes it to the wild places that only she knows. And she's not by herself, as Turrentine catches up with her. and they chase each other through the vast unknown, with Lewis and Brooks as their beaters.

Benny Golson and John Coltrane are the jazz composers called upon for the session. Golson's tune is "411 West," and if it' been recorded elsewhere, even by Golson, I can't find it. A shame. It's up to Golson's high standards as a composer, melodic enough to be instantly accessible, complex enough to bring out the best in two gifted improvisers. "Trane's Blues" is instantly recognizable in versions by Trane and by the Miles Davis Quintet with Trane. It's a good choice to take on, and they prove themselves worthy of it.

Esmond Edwards produced. Hip Soul is the title of the album, as well as the single.