That Walt Dickerson is largely unremembered is remarkable not only because he was so good, but also because his talent and artistry did not go unrecognized in his own time. This, his second album, got a 4 1/2 star review from Down Beat, just as his first album had.

This one finds Dickerson in a more introspective mood, but with the complexity and originality, and some of the pyrotechnics, that he displayed on his first album. Here he is playing ballads, mostly of his own composition. "Sense of Direction," the tune that leads off the album, is multi-directional, by turns stately and jaunty. 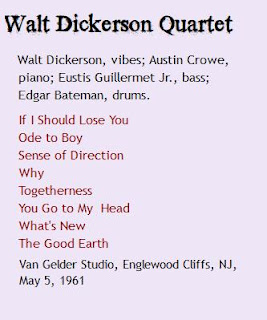 "Ode to Boy" suggests a nod to Beethoven, but there isn't much joy in it, although a lot of beauty. It really is an ode to a boy--Dickerson's brother, who drowned at sea while in the Navy. And while it doesn't summon up Beethoven, it suggests another equally classic work--it's reminiscent of John Lewis's "Django." Austin Crowe, Dickerson's longtime partner on piano, supplies a sensitive second voice.

"Togetherness" was a word invented in the mid-1950s as a slogan for the women's magazine McCall's, and it generated a lot of derision at the time. It's hard to say exactly what Walt Dickerson was thinking when he titled this piece, but it took an awful lot quick thinking and quick playing to achieve any kind of togetherness on this piece, taken at a breakneck tempo that would have left them breathless on 52nd Street. They all manage in fact -- in fact, they knock it out of the park, and drummer Edgar Bateman, new to Dickerson's team, comes through with a solo that matches the tempo and the mood of the piece...a mood that McCall's may not have exactly intended.

Bateman was a Philadelphia comrade of Dickerson's, though he was originally from St. Louis (where Oliver Nelson was a high school classmate), and made this, his recording debut, at the age of 31. He would continue to record with Dickerson off and on over the years, and with Eric Dolphy, John Handy and others. He remained a Philadelphian, and was always involved with that city's jazz scene. "What's New?" was originally written in 1938 as an instrumental by Bob Haggart for the Bob Crosby Orchestra, and entitled "I'm Free." When Johnny Burke added lyrics to it a year later for Bob's brother Bing, he created the persona of someone who is decidedly not free. Meeting an old girl friend, who has become quite free of him, he reveals in what he tries to make a casual conversation that his heart is still bound to her. The Burke lyrics are understated and devastating, and it's impossible to hear the melody any other way. Dickerson, in his introspective mode, plays it accordingly.

"Good Earth" starts with Crowe, Dickerson and Eustis Guillemet Jr., and then becomes all Dickerson, with the vibist doing what he's best at, and strong assistance from Guillemet. "Why" starts with Guillemet, and again he's a powerful presence throughout.

Eustis Guillemet Jr. was from New Orleans, born and raised in the Tremé district, and he spent most of his life in the Crescent City, playing with Professor Longhair's group when he was young. He didn't record a lot, but he played with a lot of the great names, including Duke Ellington and Cab Calloway.

The albumends with two standards, both of them widely recorded ("You Go To My Head" especially popular) and both benefiting from being given the Dickerson treatment,

Esmond Edwards produced, and the album was released on New Jazz.