Shirley Scott, again with new musicians, this time including a second keyboardist (Ronnell Bright). This is a session that was shelved and then cut up for parts, becoming parts of two later releases, Workin' and Stompin'. The idea of naming albums with participles goes back to the series that came out of the Miles Davis Contractual Marathon, and in fact Workin' did double duty as a title for Miles and Shirley.  Workin' and Stompin' both came out in the same year, 1967, which is a little odd--you'd think if they were releasing both at the same time, they'd put all the songs from the sane session on the same album, but 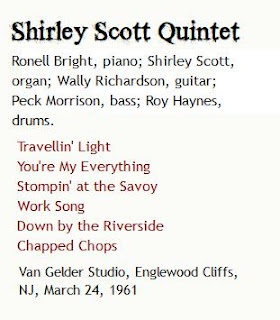 I don't know what goes into making decisions like this. Nor do I know why a recording sits on the shelf for six years. In the case of Shirley Scott, it can't have been concern that they wouldn't sell. And it certainly doesn't appear to have been a concern for quality -- this is prime Shirley, listenable and musically rewarding. But if there is one thing I am sure of in this life, it's that I know nothing about marketing.

This new aggregation behind Scott is a solid one. Peck Morrison and Roy Haynes are as reliable as they come. Ronnell Bright is a welcome addition, and Wally Richardson is exemplary. The guitar-organ combination is getting to be a soul jazz staple, and although Richardson hadn't done any soul jazz sessions, he was certainly conversant with the blues. On Prestige, he had recorded with Al Sears and Willie Dixon, as well as jazz vocalist Betty Roché. Also during the 1950s, he had worked with blues and R&B figures as diverse as John Lee Hooker and Frankie Lymon.

Workin' was the first of the two to be released, and it included, from this session, the Scott original "Chapped Chops" and Nat Adderley's "Work Song." It was still a new tune when Scott recorded it in 1961, having just been debuted the year before, first by Nat and then in the two most famous versions: the one by both Adderley brothers, in a group led by Cannonball, and the other the vocal rendition by Oscar Brown Jr. But by the time the album was released, it had become virtually a signature song of soul jazz. Scott's version is a worthy addition to the canon. The tune sounds great on the organ, Scott's improvisation on it is compelling, and so is Richardson's solo. 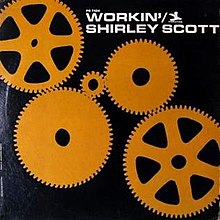 Stompin' takes its name from "Stompin' at the Savoy," off of this session, and I love what Scott does with it, especially in the upper register of the organ. The rest of the session is two standards and a spiritual, and the album is mostly standards, so maybe that's why they divided the session the way they did.