Curtis Jones was another blues veteran who had a career in the 1930s, recording for Bluebird, Vocalion and Okeh, all of them budget labels (cheaply pressed, cheaply sold) specializing in race record, then faded from the recording scene sometime in the early 1940s, then resurrected a career in the Chicago folk music coffee houses in the 1950s. He was a little unusual for the folkie coffee house scene in that the tended to favor guys who played portable instruments like guitars, and Jones was a piano man, although he had started out on guitar, and could certainly have returned to it if that was where his bread and butter lay. A working musician does what he has to. 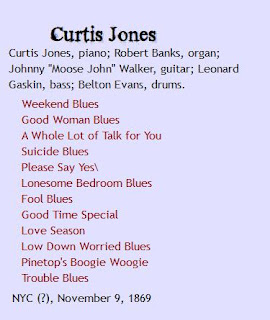 But Chicago had always had a blues piano scene, starting with Leroy Carr and including the likes of Memphis Slim and Champion Jack Dupree. And it was a good town for finding the kind of bluesmen that Bob Weinstock wanted to bring to New York--traditional blues with a touch of jazz thrown in--although Jones didn't stay long. He recorded the one album for Prestige Bluesville, then one back in Chicago in 1962 for Delmark, a latecomer to the jazz and blues independent label scene. Then he headed east again, but didn't stop until he got to Europe, where he would spend the rest of his life, dividing his time between the continent and Morocco.

Bluesville's producer Ozzie Cadena put Jones together with organist Robert Banks, veteran of several Prestige blues sessions, and Johnny "Moose" Walker, a Chicagoan and another fine blues piano player/organist. Organ and piano are pretty well covered for this session, though, so Walker, who also played bass for Muddy Waters. is heard on guitar. The primary instrumental voice, however, belongs to Jones's piano, and he really is one of the top notch blues stylists on the instrument. 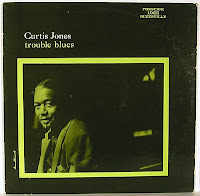 Jones's biggest hit in the 1930s was "Lonesome Bedroom Blues," a 1937 recording for Vocalion. He reprises it here, and it would become the title cut for his Delmark album. The title cut for this one is "Trouble Blues," co-writing credit given to Jones and Cadena. Cadena is credited as sole composer for "Please Say Yes," which breaks away from the traditional 12-bar-blues structure often favored by Jones, and uses verse-chorus in a manner reminiscent of Ray Charles. He goes to Armand "Jump" Jackson for two songs, and to Pinetop Smith for "Pinetop's Boogie" (left off the original album, included on the CD reissue). The rest are all his own. Jazzdisco only has "NYC" as the location of the recording studio, while Wikipedia puts it at the Van Gelder studio in Englewood Cliffs.