Prestige Bluesville gave Sonny Terry solo billing on an album one week after they had done the same for his partner Brownie McGhee. Brownie is not present at all on this album, but his brother "Stick," best known for the 1947 Atlantic hit "Drinkin' Wine Spo-dee-o-dee," plays on a few tracks, as does Sonny's nephew, J. C. Burris. Burris is also a harmonica player, but augments the mouth harp with a percussion instrument, the African rhythm bones. The bones are two smooth sticks played like castanets. Percussion is also provided by Belton Evans. heard previously on Bluesville sessions with Sunnyland Slim and Roosevelt Sykes, and on jazz sessions with King Curtis and Al Casey. 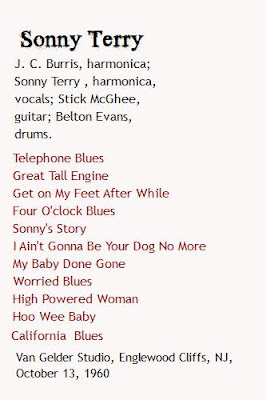 The Piedmont blues of Sonny Terry and Brownie McGhee was an interesting phenomenon. The Great Migration of early and mid-20th Century had its own blues migration subdivisions. Bluesmen from Texas like T-Bone Walker tended to migrate to the West Coast. The Delta blues singers like Muddy Waters came north to Chicago and Detroit, where they created the urban blues style which was most widely disseminated by Chicago's Chess records, and which strongly influenced the British blues rockers. The east coast blues musicians tended to find their way to New York, which had its own music traditions, and they weren't necessarily about the blues. New York was a jazz town--it became the jazz town. For a while, when the entertainment world had not yet settled on a name for the kind of music that Charlie Parker and Dizzy Gillespie were making, that was being developed in the cauldrons of Harlem and the firepits of 52nd Street, it was called New York Music, and I half wish that name had stuck. It became a doo wop town. And was certainly a Latin music town, with Machito and Tito Puente and others making great music that is still undervalued by jazz audiences and jazz historians. But it never developed the kind of blues sound and blues audience that a town like Chicago did. Atlantic stepped into the void in its own way. When Jerry Wexler and Ahmet Ertegun scouted Ruth Brown singing in a jazz 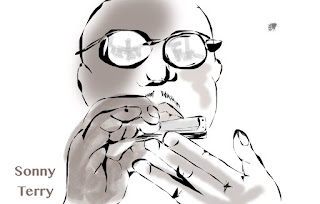 club, and they went to talk to her afterwards, they told her they wanted her to sign with a new blues label they were starting. She said. "What do you want with me? I don't sing the blues. I hate the blues!" They assured her, this would be a new kind of blues. And it was. Ahmed and Nesuhi Ertegun, jazz lovers anxious to start a label that would be commercially viable, were among the pioneers of jazz with a beat--rhythm and blues.

So where did this leave the traditional blues players from what came to be known, for no discernible reason, as the Piedmont area-- the southern Atlantic coastal states?  Their music was Finian's Rainbow. finding a limited market, at best, with the sophisticated black audiences of New York, and blues-based music was as yet of not much interest to mainstream white audiences.  Stick McGhee signed with Atlantic and had one big rhythm and blues hit (Brownie McGhee played on the recording, as did jazz bassist Gene Ramey). Other Piedmont musicians took different paths. Josh White smoothed his style, adjusted his diction to fit white audiences, and played supper clubs. Sonny Terry made his mark as a featured performer in a long-running Broadway musical that had race relations as a sub-theme,

Lead Belly had made a path for "old-fashioned" blues singers in New York. It wasn't a music that sophisticated black audiences were interested in, so Lead Belly and Alan Lomax created a new audience of white leftists who wanted to hear "the people's music."  Terry often played and recorded with Lead Belly and Woody Guthrie for Folkways, a label that combined the field recordings of musicologists with the urban folk revivalists, and for Stinson, a label founded by American Communists originally to release recordings by the Red Army Chorus.

Lead Belly was a mentor to Terry. Brownie McGhee's song "Me and old Sonny....Sonny Terry is my best friend" (he wasn't) is taken from Terry's "Me and Huddie Ledbetter...." Terry's other mentor was Piedmont blues pioneer Blind Boy Fuller, who died in 1941. Those two mentorships come together on this album in the song "High Powered Women."  The melody and the structure come from Fuller's "Step it Up and Go," which later, as essentially the same song, was Lead Belly's "Borrow Love and Go" (sometimes "Bottle Up and Go"). Lead Belly framed his song as a tribute to "the high powered women of today. You got women who can fly airplanes...you got radio women...they can do anything a man can do." Terry takes some of both for his version.

The 1960s blues revival may have centered around the Chicago blues musicians and their Delta forebears, but the Piedmont bluesmen, especially Sonny Terry and Brownie McGhee, did all right by themselves. They continued to work as a duo, playing blues festivals and college dates and European tours, until 1980, and Sonny kept on working until he died in 1986, one of his last gigs being a recording of his version of Robert Johnson's "Crossroads Blues" for the movie Crossroads.

Listening to Prestige Vol. 2, 1955-56, and Vol. 3, 1957-58 now include, in the Kindle editions, links to all the "Listen to One" selections. All three volumes available from Amazon.
The most interesting book of its kind that I have ever seen. If any of you real jazz lovers want to know about some of the classic records made by some of the legends of jazz, get this book. LOVED IT.– Terry Gibbs