Shirley Scott is back with her trio and some timeless standards from the best: Rodgers and Hart, Cole Porter, Johnny Mercer. In other words, more Moodsville than soul jazz, and this was in fact a Moodsville release.

Of course, just because it's on Moodsville, that doesn't make it easy listening. Producer Chris Albertson has said that when you went in to the studio, you weren't thinking Moodsville, Swingville or Bluesville, you were making a jazz album for Prestige, and that's what Esmond Edwards and Scott are doing here. The album leads off with a Scott original, "Like Cozy," and while George Duvivier and Arthur 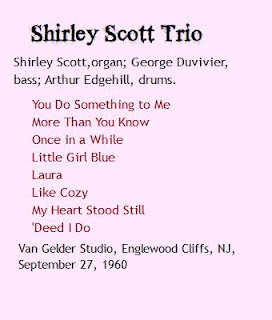 Edgehill lay down a solid groove, Scott gets off some of the swooping experimental voicings that she's so fond of, before settling into a soulful melody.

"Little Girl Blue" was already a solid standard by 1960. Written by Rodgers and Hart for a 1935 musical, it really entered the pop/jazz lexicon when Margaret Whiting recorded it in 1947. It was the title song from Nina Simone's 1958 album on Bethlehem, and while "I Loves You Porgy" was the hit single off that album, "Little Girl Blue" was also released as a single, got a lot of air play, and became the definitive vocal version for many. Bud Shank made the first jazz instrumental version in 1954, and after that the floodgates opened. in 1955 alone it was recorded by Dave Brubeck, Tal Farlow, Johnny Smith and Gerry Mulligan, and it's still being brought into the studio by vocalists and instrumentalists alike. Scott gives us a smoky piano veraion here, very much suggesting that she'd absorbed a lot of what Simone was doing, but still very much Shirley.

Johnny Mercer's "Laura," from the movie of the same name, is one of the most widely recorded songs in the canon--in 1960 alone, there were at least a dozen versions. So if you're going to play it, you've got a double task. First, if you put "Laura" on your album, your audience is going to want to hear "Laura," because it's a beautiful, haunting melody, and second, you've got to distinguish your version from the others. Scott manages to meet both demands, with every note sustained virtually forever, giving the haunting melody a haunted quality, and changing the tone from the wistful single notes of "Little Girl Blue" into something rich and strange. Then she snaps that mood again with Cole Porter's "You Do Something to Me" - piano again, upbeat and percussive, lotsa improvisatory flights, lotsa room for Edgehill and Duvivier, with some very nic stuff by Duvivier.

And that's how the album goes--some organ, some piano, some experimental, some reassuring, a variety of moods, and all Shirley. Good stuff for her fans, good stuff to listen to years later, when the organ trios have faded into history. No single releases from this session, I guess on the theory that Moodsville fans were album fans. The album was released as "Like Cozy."