I always had this fascination with jazz and with rhythm and blues. I grew up in a time and place where the adults I knew, at least the ones I was trying to emulate, were artists and intellectuals, who listened to classical music if they were old guard, jazz if they were on the cutting edge, rock and roll not at all. And if you were part of that world, or on the fringes of that world, and you loved rock and roll, you had a bit of an inferiority complex. You probably had it anyway. 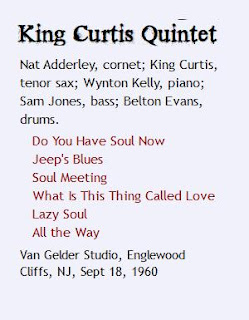 I was never going to do what I really wanted to do, which was drop out of school, go to New York, find the Brill Building, camp out in front of Jerry Leiber and Mike Stoller's office, and pester them until they took me in as an apprentice. Other teenagers like Carole King and Neil Sedaka were actually doing it, but I was so locked in to a certain world view that it not only never occurred to me to do it, it never occurred to me until much, much later that I had really wanted to do it.

So the part of me that was turning to jazz was looking for approval, the part that still loved rock and roll was still defensive. And the part that loved rhythm and blues...well, no one much noticed of cared about that part. Norman Mailer, in "The White Negro," described, in Nelson George's summary,

a new white outlaw...wandering the landscape, a "hipster," a "philosophical psychopath," whose primary inspiration was the music and sexuality of Afro-Americans...Yet in perpetuating the romance of blackness, supporting the notion that black juazzmen, for example, were in touch with some primal sexual energy, Mailer was as guilty of stereotyping blacks as the rednecks and social mainstreamers his white Negro opposed. While liberals hailed and debated Mailer's provocative rhetoric, many working class white teens were already living out the ideas Mailer articulated, infatuated as they were with black style and culture. But Mailer saw jazz as the crucial element in this new modern white personality; he had no idea of what most Negroes, or their white teenage fans, were really recording or buying.

I had a foot in both worlds. I read Norman Mailer, and I read Jack Kerouac's "Jazz of the Beat Generation" -- and I realize now, in hindsight, what Sal Paradise and Dean Moriarty must have been really listening to in Oakland on that sweaty summer night in 1947.  Charlie Parker's jazz revolution had not made it as far as Oakland; his 1946 gigs in Los Angeles had been pretty much of a fiasco, and had let to a six-month relaxation at Camarillo State Mental Hospital. Sal and Dean were most likely listening to rhythm and blues--someone like Big Jay McNeely. And they thought it was jazz because, dammit, they were right. It was jazz.

I didn't have Nelson George and his great book, The Death of Rhythm and Blues, as a guide then. My other foot was with the white teenagers listening to Fats Domino and Little Richard (a music that in 1960, post-payola, was running very thin) and a ways deeper, with the Negroes that George describes, listening to Muddy Waters and Willis "Gator Tail" Jackson and Amos Milburn. And with no brilliant theoretician like George to give me intellectual support, I remember how thrilled I was to buy this album when it came out: one of my rhythm and blues heroes, King Curtis, playing real jazz along with card-carrying modern jazzmen like Nat Adderley. Playing Ellington!

Soul Meeting is the name of the album (on a re-release intensified to Soul Meeting!), and it precedes the other, somewhat better known Soul Meeting between Ray Charles and Milt Jackson by a year. And certainly, soul is the meeting ground for these diverse and considerable talents. They do take on Ellington: "Jeep's Blues." written with Johnny Hodges and originally recorded in 1938 under his name, later and most famously on the 1956  Ellington at Newport album. Ellington knew his way around the blues, and so do these guys. They also show their skill with standards and pop ballads (Cole Porter's "What Is This Thing Called Love?" and the Sammy Cahn/Jimmy Van Heusen hit for Frank Sinatra, "All the Way"). But they really find their groove, and their bliss, in the three Curtis originals, which bring out the best in both lead instruments and in Wynton Kelly, who contributes solid accompaniment and some smashing solos.

Production credit is shared by Esmond Edwards and Ozzie Cadena, who would take over as chief of A&R for the label when Edwards left a couple of years later. The album was something of a Prestige producers' convention, as Don Schlitten, who produced two sessions for the label in 1957 and would do a bunch more later on, provided the art direction and album cover design to go with Edwards' photo of Curtis.

"Soul Meeting" and "All the Way" were released as a 45 RPM single on New Jazz.