Al Smith never managed to make a name for himself, perhaps in part because "Al Smith" was a hard name to make. Too much competition. Smith was never likely to be confused with New York governor Al Smith, the "Happy Warrior" who ran for president in 1928, or Al Smith the cartoonist who drew Mutt and Jeff for 50 years, or any of the professional athletes named Al Smith, but there were also two other Al Smiths playing and singing the blues. The best known was the Midwestern blues and jazz bandleader and bass player who may have inspired the old joke about the bass player sitting on the edge of the bandstand, crying his heart out. "What's the matter?" the bandleader asks solicitously. "The guitar player untuned one of my strings!" "Well, that's very childish of him, but I don't see why it's something to cry about." "He won't tell me which one!" 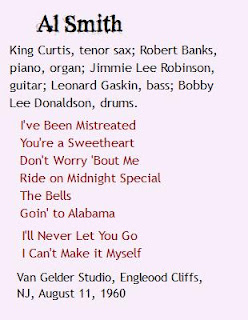 That Al Smith was a successful bandleader because he could always hustle up gigs and he paid his musicians on time, but he didn't know how to tune his own bass, and always had someone in the group tune it for him.

Another Al Smith sang with Jack ("Open the Door, Richard") McVea on the West Coast.

Prestige's Al Smith was a terrific singer who never emerged from the pack. He doesn't get an entry in Wikipedia, and AllMusic has a listing for him but no bio. The listing is a bit of a mess. His genre is described as Blues, Comedy/Spoken Word, and I'm not sure who they're confusing him with. His discography is correct--the two Prestige/Bluesville albums--but his list of song credits seems to encompass songs by all three Al Smiths, and maybe even a couple by the governor. His birth stats are given as Bolivar City, MS in 1923, which is the correct information for the untuned bass player (this Al Smith was born in 1936 in Columbus, Ohio).

Anyway, what you need to know about Al Smith is that he was a terrific blues singer. He could shout the blues, old style. He could croon the blues in a manner that suggested something of both of the premiere rhythm and blues stylists of the day, Sam Cooke and Jackie Wilson.

He is given a different set of musicians this time around, headed by King Curtis, who had recently begun recording for Prestige. Maybe Bob Weinstock was looking to capture some of the rhythm and blues success of Atlantic Records, for which label Curtis contributed some memorable solos. But maybe not. Curtis is not really the dominant instrumental voice here. He has some terrific solos, particularly on "Don't Worry 'Bout Me" and "Ride On Midnight Special," as does guitarist Jimmie Lee Robinson, but the main instrumental voice is that of organist Robert Banks. Which makes a certain amount of sense. The rhythm and blues style of King Curtis is associated with 1950s hits like those of the Coasters, and the organ sound was very much in vogue in 1960. 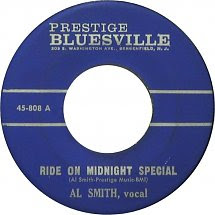 Banks and Robinson are both new to Prestige. Banks would do a few more sessions for Prestige/Bluesville, and go on to have his greatest success as keyboardist for Solomon Burke. He has a discography note I've never seen before: a couple of songs that were released only on 8-track cartridge.

Robinson was a well-regarded session man around Chicago in the 1950s-60s, so actually he could have played with the other Al Smith, though there's no record of it. He did play with Little Walter, Howlin' Wolf, Magic Sam and Buddy Guy, and mentored Freddie King, who called Robinson his most important influence. He had a career renaissance in the 1980s.

The musicianship and arrangements on the session are first rate, as is the singing. In addition to the album, which was titled Midnight Special, Bluesville released two singles, "You're A Sweetheart" / "Ride On Midnight Special" and "Don't Worry 'Bout Me" / "Goin' To Alabama." None of it made a dent, and Smith would not record again.