Listening to Prestige continues to be an enriching experience beyond what I even expected, as the Swingville catalog expands and showcases exemplars of a style of music I haven't always paid enough attention to. Pee Wee Russell played jazz over five decades, making a name for himself as one of the leading Dixieland and Chicago-style musicians, playing for most of his career with solid traditionalists like Eddie Condon and Henry "Red" Allen, yet always known as an odd duck in a field that did not always take kindly to odd ducks. Dixieland players, especially as, like Eddie Condon, they dug in their heels against modernism, prided themselves on hitting notes squarely, but Russell never exactly did that. His style was always punctuated by growls, swoops, yelps, and off-notes that would have felt right at home in a bebop setting. Indeed, he is certainly the only traditional jazz musician ever to play the Newport Festival as part of Thelonious Monk's group. With Condon, partly because of his unorthodox style and partly because of his hangdog looks, he was the comic relief for Condon's stage schtick, but there was nothing ridiculous about it when he stepped out front and started soloing. 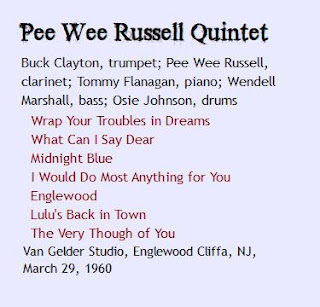 Russell was on a comeback that had almost seemed impossible. In 1951, alcohol had caused a physical breakdown that sent him to the hospital, where many thought he would not recover.

Esmond Edwards, for his Prestige debut, put him together with a versatile group of musicians. Buck Clayton is perhaps best known for his work with Count Basie, and for a swing-era style, but in his time with Norman Granz's Jazz at the Philharmonic he played with everyone, including Charlie Parker. The rhythm section is equally versatile, and together, they create a session that is satisfyingly mainstream and still full of surprises.

In fact, everyone in this session is capable of delivering up surprises, and they do--even Wendell Marshall, who's tasked with keeping everyone in line and is up to the job, his walking bass weaving in and out among the soloists. Osie Johnson delivers a couple of stinging solos. 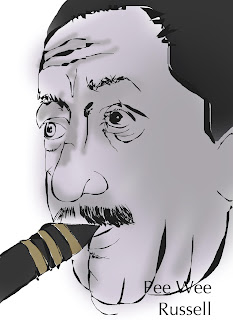 And Tommy Flanagan, raised in the bebop hotbed of Detroit but capable of playing with anyone, raises some serious eyebrows here. He doesn't come close to staying within the conventions of traditional jazz, and yet everything he does works, making this a session that is absolutely located within Swingville, but rewarding for anyone of any jazz taste who takes the time to give it a listen.

The best YouTube presentation is the whole album, so that's what I've put up, but if I were able to single out a Listen to One, it would be "Lulu's Back in Town"--a Dixieland chestnut, but not the way they play it.

The Swingville album was titled Swingin' with Pee Wee.
Posted by Tad Richards at 12:49 PM