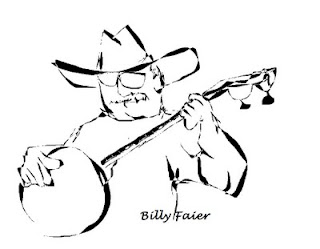 This past weekend was the Saugerties Artists Studio Tour, and I had my studio/showroom open in the Barbara Fite Room at Opus 40. It was a great weekend -- sold a few prints, a few books, and met some old friends. Sunshine, one of my mother's dearest friends.

And a guy with a big bushy white mustache, who introduced himself to me. I remembered him, though he didn't remember ne -- which is as it should have been. I was a teenager, hanging around Woodstock, just starting to find out who I was and who I wanted to be, and he was one o the people I wanted to be. Billy Faier, banjo virtuoso. Wandering troubador, itinerant folksinger.

Turns out he's still around, and still -- after a bout with carpal tunnel, and an operation to correct it -- playing the banjo. He lives in Texas now -- "One of the biggest reasons I like living in Texas; it's the only place I ever saw where the inhabitants love to sit around the campfire half the night singing songs about their home state. Can you imagine this happening in New York? New Jersey? Of course not." He has a website which contains a fascinating mini-autobiography, and a great account of the folk scene in the 40s and 50s. Even better than that, it has a treasure trove of Billy's music from over the years, available for streaming audio or download.

My friend, banjo legend George Stavis, when I told him about running into Billy, said "I consider him one of my true progenitors."

For locals, Billy Faier will be playing at the Woodstock Farmers Market this Wednesday, Aug 17, 5-7 pm.
Posted by Tad Richards at 12:02 PM